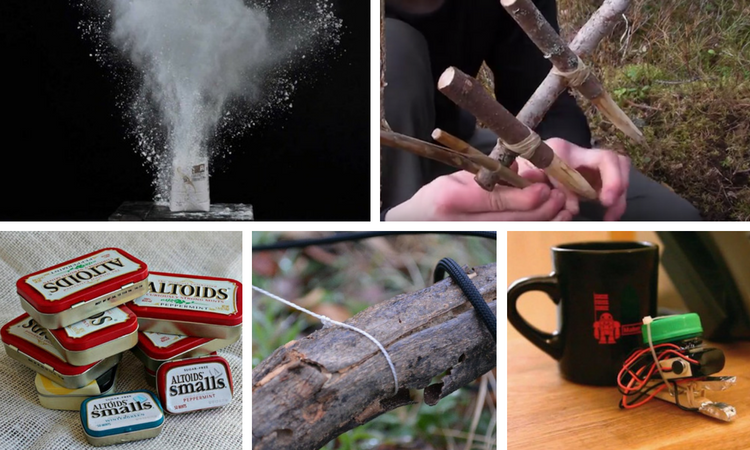 A booby trap is a rig or device that uses the element of surprise unknowingly triggered by the victim to threaten, harm, or kill. With our society quickly heading towards lawlessness, you cannot be too sure about your safety. Not only is protecting your family and home important but so is never letting your guard down.

Although you may know of the infamous roadside bombs and IEDs of the Middle East, you most likely do not know that the history of booby traps is long and rich. Although every booby trap is potentially dangerous, a few clearly rise above the rest.

Whether it is how sick and cruel the booby traps are, how intelligently they are hidden in everyday objects, or the amount of destruction they can unleash, the following 11 ingenious booby traps are the most fiendish and ideal if you want to safeguard your homestead. 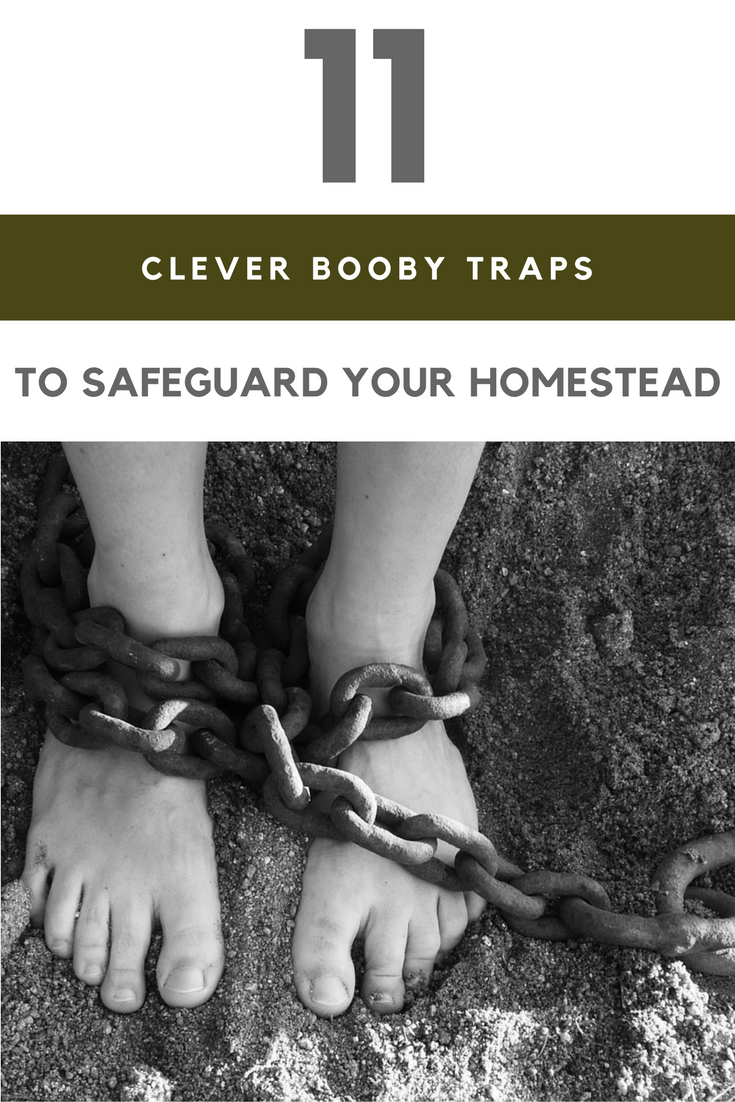 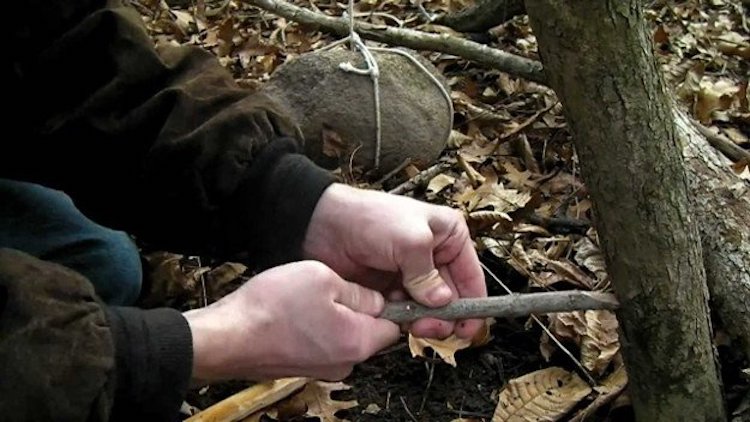 The tripwire booby trap is a cord or wire stretched at a height that is close to the ground and then attached to an alarm system or explosive with the intention of preventing intruders from entering that particular area.

Although this type of booby trap is one of the most basic, it is arguably among the most effective and easy to install forms of security. You can easily find instructions and video material on how to make a trip wire on the internet.

2. Just like our ancestors used the feather spear trap 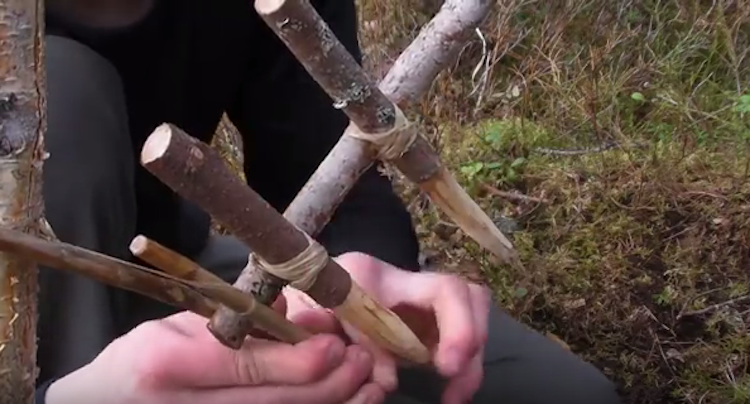 As a matter of fact, it is known that our ancestors used this type of trap not only to hunt for wild animals but also to protect their lands from invaders. Although it is generally recommended for survival, you probably know that safety is a core factor when it comes to surviving.

3. Use a paracord snare trap to break the intruder’s neck 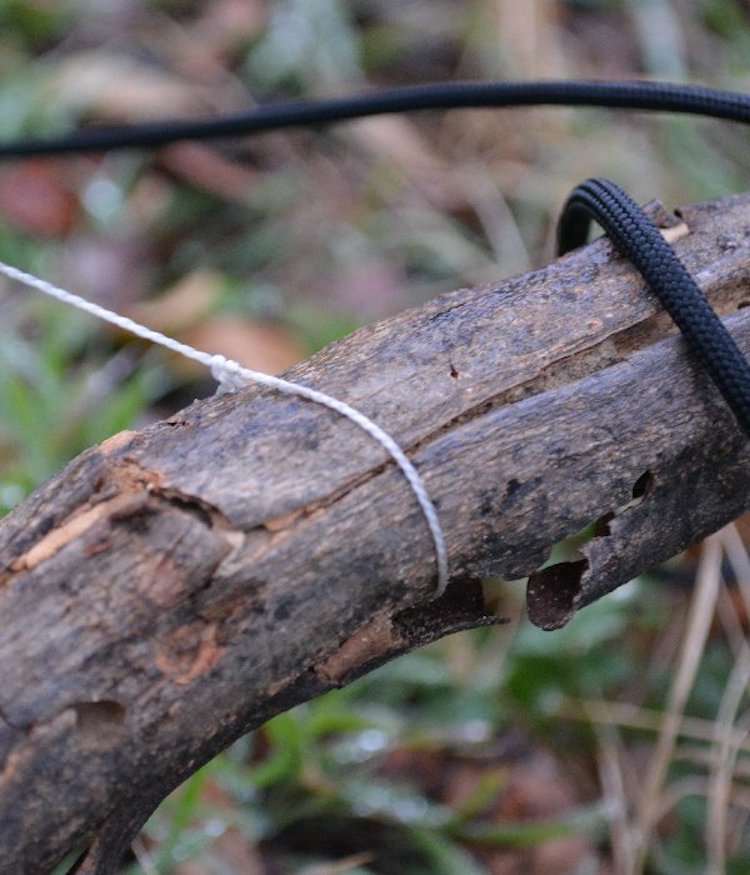 The paracord snare trap is among the most straightforward forms of booby traps, and it usually catches the victim around the neck even though it sometimes ensnares the body. It is, therefore, a useful tool when it comes to catching and harvesting furbearers or small game.

Although it could be illegal in some states, this type of booby trap is extremely reliable in a survival situation, and equipping yourself with the skill to make a paracord snare trap is good leverage for safety and survival. You can go online for video instructions on how to build a paracord snare trap.

Related: 25 Survival Projects You Need to Try With The Paracord Bracelet

4. Explode right through your intruder’s foot with a small arms cartridge trap

The small arms cartridge trap was devised and widely used during the Vietnam War by the Viet Cong. It is named after the fact that its wounding component is a small arms round or shell, also known as a cartridge.

This type of booby trap is simple and made of four main components, a small arms cartridge, a piece of bamboo, a piece of wood, and a nail. The pressure exerted when the weight of an intruder presses the cartridge onto the nail causes the round to explode through their foot, which will either stop them in their tracks or deter them from proceeding with the intended intrusion.

5. Use corn flour explosives and see them flee! 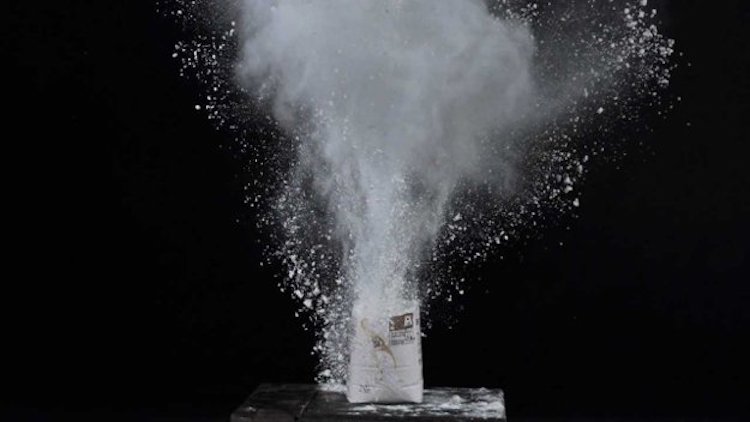 When corn flour is sprayed in the flame of a burning candle placed inside a tin can, the rapid combustion causes an explosion. The reaction changes the chemical energy stored in corn flour into heat.

If kept to a small scale, the result is not really an explosion. However, it still is an ideal scare tactic since potential intruders will most likely steer clear if they saw flame balls coming from the targeted area. 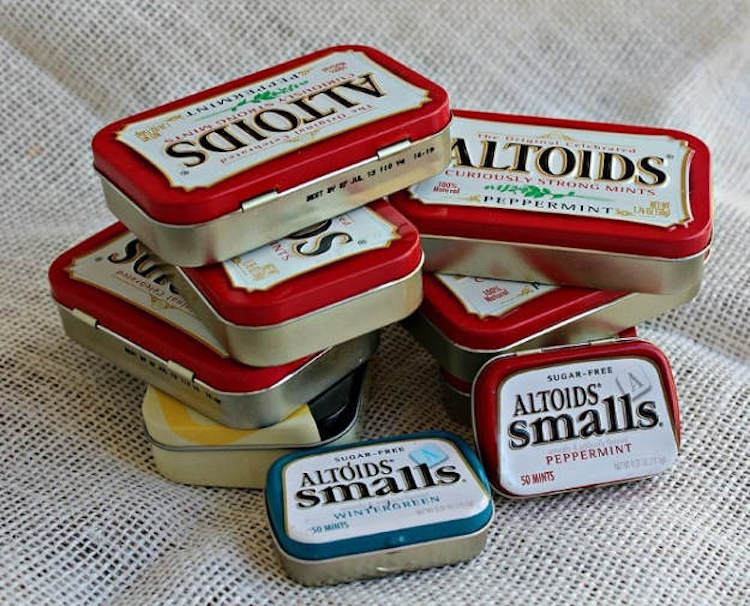 If you are a survivalist, you probably know that you can use an Altoid tin for a variety of functions. One of the uses is that you can always turn it into an alarm system.

Having a form of warning in case of an intrusion is the first step to ensuring you provide your family and home with adequate protection.

7. Slow burning fuses allow you to delay that explosion enough to get away 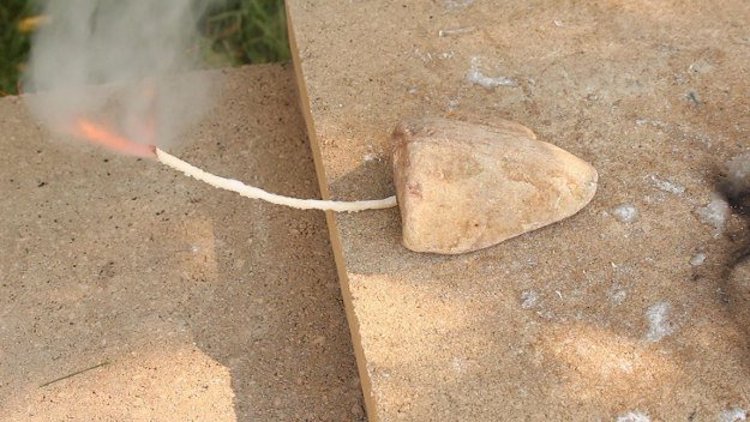 You may have experienced times when you would have scared off an intruder by simply setting off less destructive explosives such as fire crackers. In such a scenario, a slow burning fuse would come in handy.

Related: 10 Primitive Survival Shelters That Could Save Your Life

8. Set up a punji stick pit and impale that would-be intruder 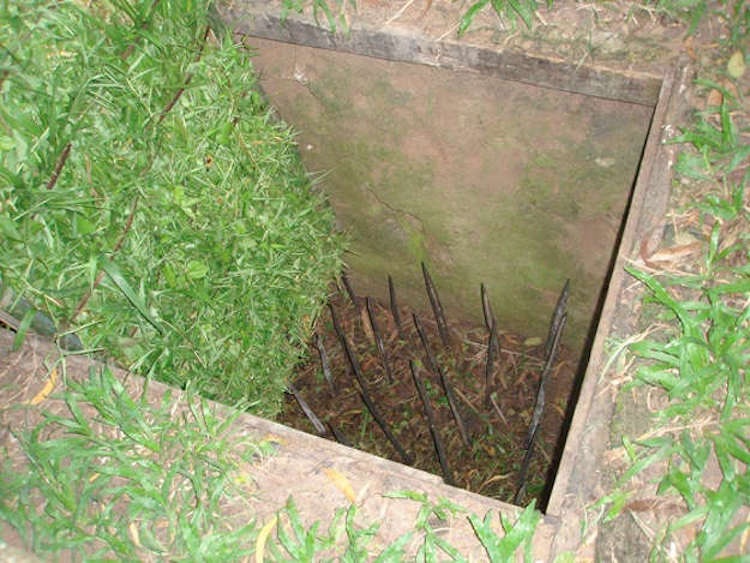 This type of booby trap is sometimes called the punji stake pit. It involves sharpening and fire hardening pieces of bamboo, before burying them in a camouflaged pit.

As a result, any intruder who falls into the pit will be impaled by the sharp spear-like stakes sticking out of the ground. The stakes must be hard and sharp enough to penetrate thick soles. You can also soak the end of each stake with poison or any enzyme capable of causing an infection.

This booby trap is capable of causing severe injuries and even death. Although it might seem cruel, this is exactly why it is effective as a protective measure.

9. Install a talking booby trap and warn off potential intruders 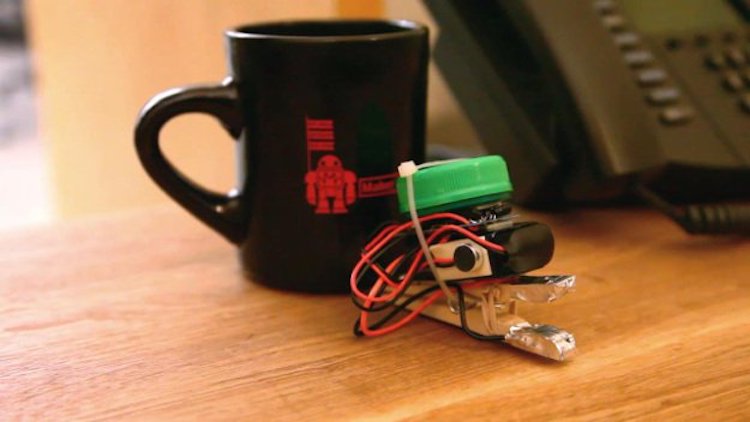 You may have some trouble with people snatching your personal stuff. You should consider the installation of a talking booby trap if you are looking to catch sneaky snoops or culprits and get some privacy by preventing those pesky thieves from stealing your stuff.

A talking booby trap allows you to record a personalized message or sound effect before hiding the gadget in a strategic place. Intruders will hear your surprise message warning them to keep off immediately your stuff is disturbed.

10. Scare the hell out of would-be intruders with an explosion simulator 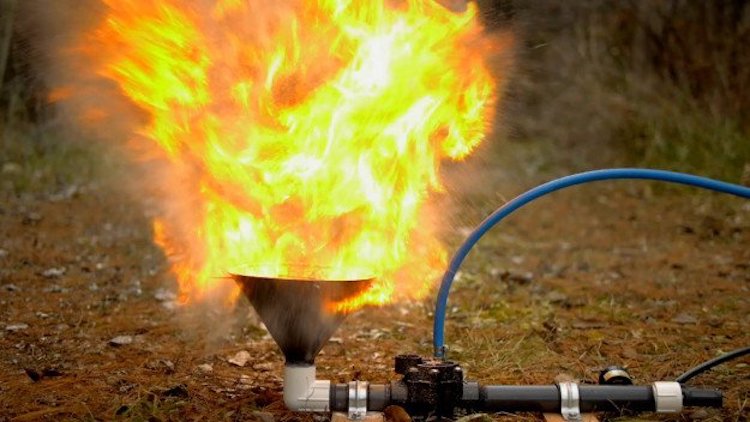 Although it is just a simulator, this type of booby trap is usually effective and reliable if installed correctly. The fire emitted by this simulator is bound to drive away any sneaky thief, and although it is generally used to scare away would-be intruders, the explosion is capable of causing serious injuries.

For many people, natural booby traps are the most preferred kind. Planting thorny plants that are non-threatening in appearance along your home’s perimeter is a sure way to keep people from breaking in through the windows.

Some plants such as the Osage orange are green and friendly in appearance, even though they pack a strong punch with their strong, thick thorny branches. While trying to access your windows, intruders will most likely support themselves by grabbing the thorny branch, and the resulting pain is enough to deter their efforts.

Which Booby Trap Will You Try?

Protecting your family and home from intrusion is one of the most effective ways to secure your interests. Unfortunately, contemporary intruders are adept at disarming most of the home security systems currently available on the market.

Being a little bit creative might be a solution to rising levels of insecurity. Although the ingenious booby traps mentioned above can be dangerous and sometimes fatal, they are all effective security measures.

Remember, you do not have to install every booby trap listed above. You can start by picking the ones that stand out, and knock them off the list.

If you have the time, starting small with a single trap might be the best option. However, the safety of your family and family is upon you. 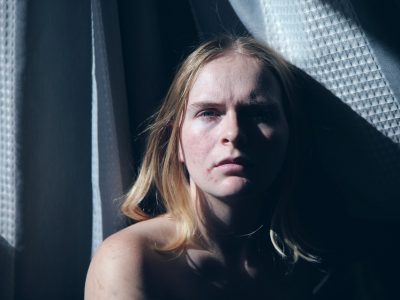 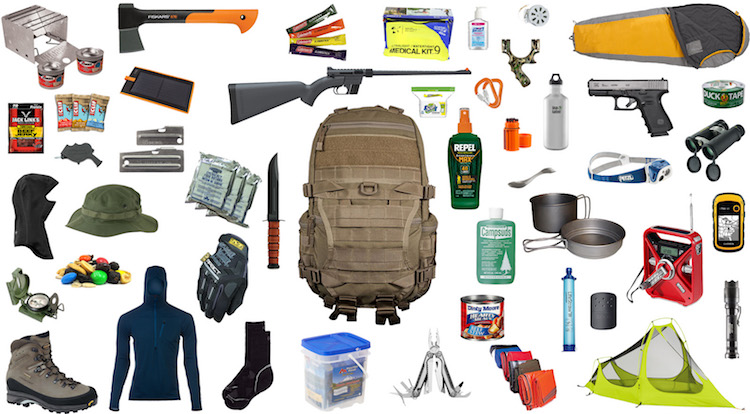 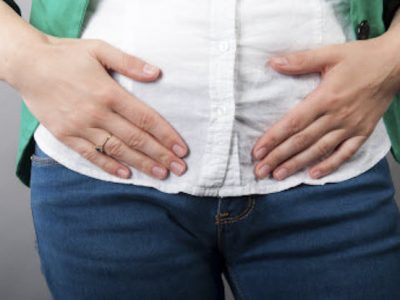 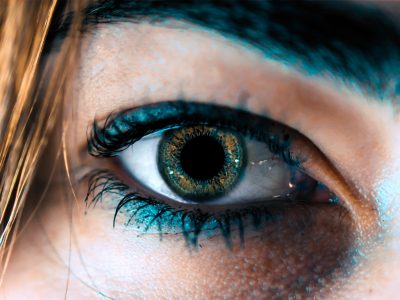 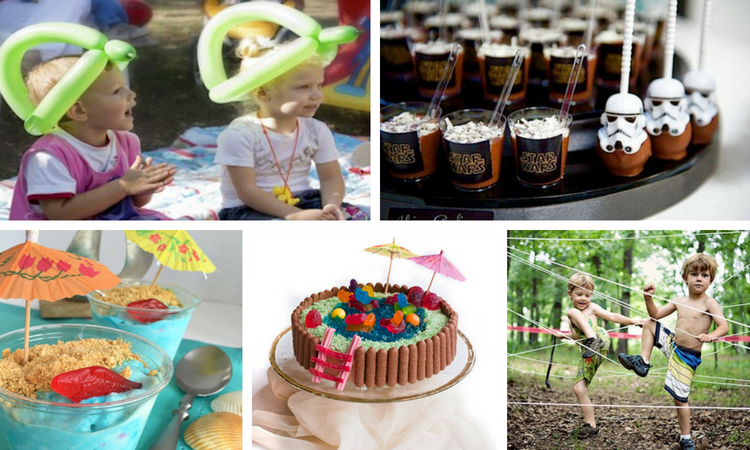