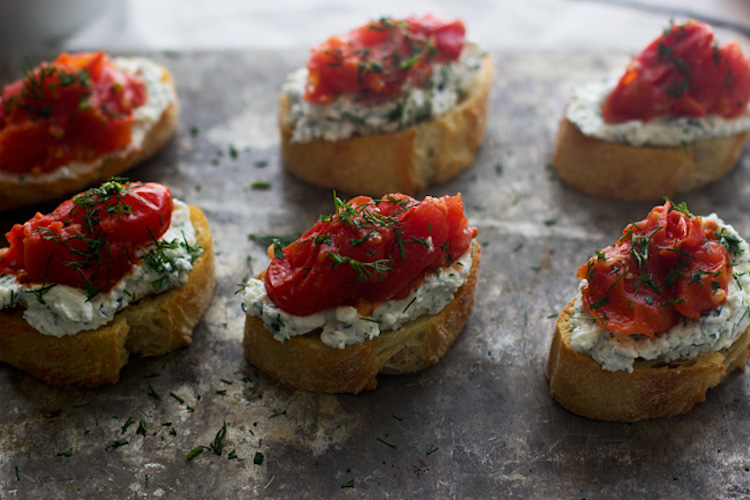 [adinserter block=”1″]
One of my favorite hobbies is entertaining; I love getting friends and family together, love the colorful conversations that inevitably happen and most of all, I love the foods and drinks that come along with it.

While each party I throw has a different menu, one thing that’s always sure to be on the table is a crostini of some sort. Having something guests can easily pop into their mouths while mingling with a crowd is always a must, and crostini are the perfect vessel to do that. Plus, they’re pretty adorable.

In all of the years I’ve been cooking and entertaining I’ve made hundreds of different versions of crostini, it’s one of the reasons I love them so much – for their versatility.

In the fall, you can find me topping garlicky pieces of baguette with creamy goat cheese and roasted beets; in the winter thinly shaved slices of beef tenderloin dotted with spicy horseradish sauce; in the summer, fresh mozzarella with sliced heirloom tomatoes and balsamic glaze; and in the spring, something very similar to these herbed ricotta and burst cherry tomatoes.
[adinserter block=”4″] 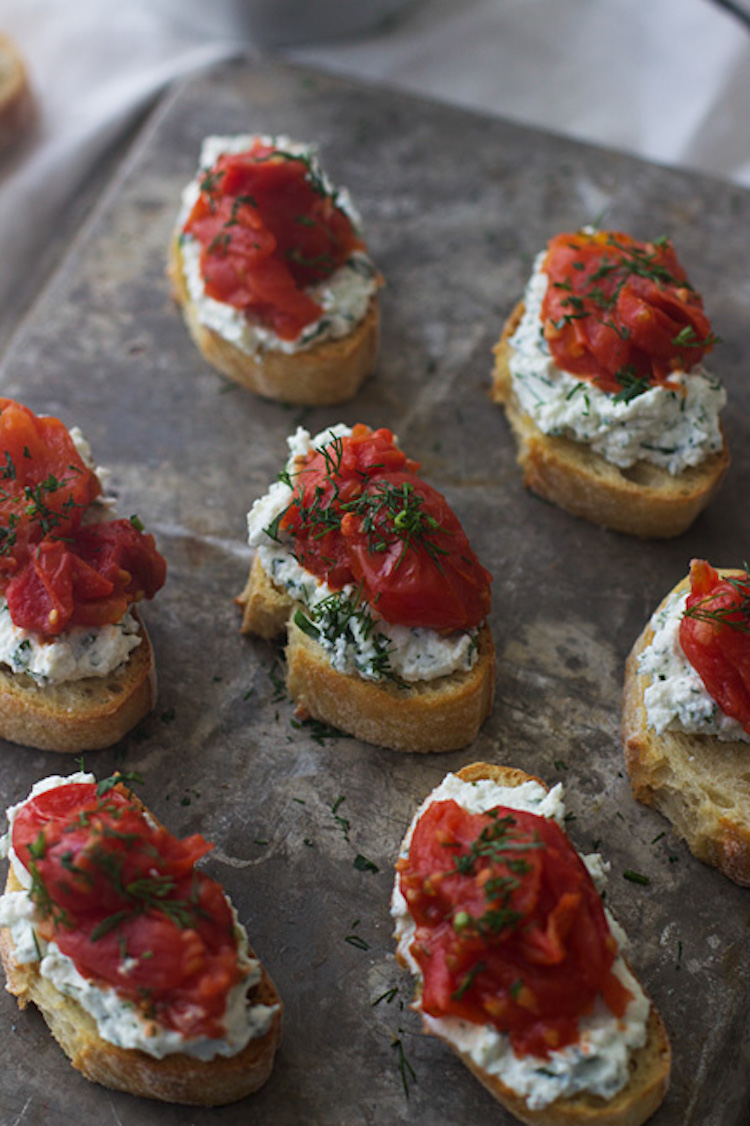 Right now is a weird transitional time where I’m craving all of the fruits and veggies that come along with the latter part of spring and summer, but most of them aren’t in season quite yet.

I’ve missed tomatoes so much in the last six months, and one way I’ve found to utilize them even though they’re probably not quite up to par is to cook with them instead of eating them raw.

So even if you have a batch of tomatoes that’s slightly under ripe or not quite at its peak yet, you can still get that lovely tomato flavor without sacrificing quality. 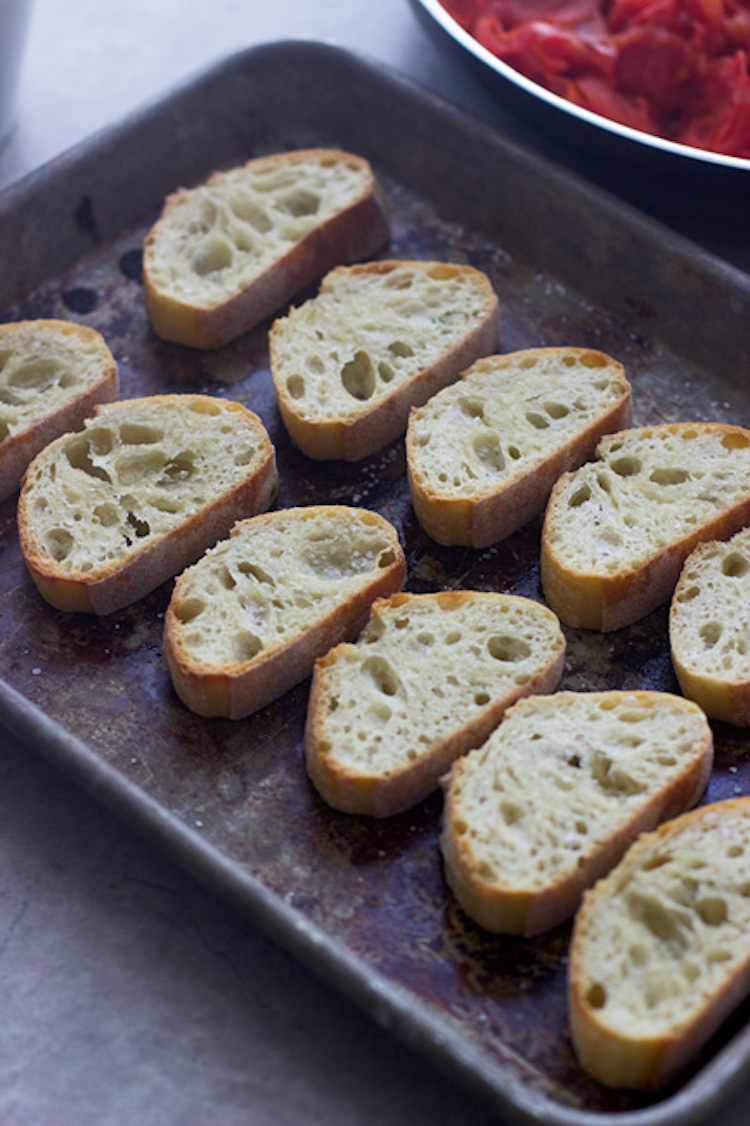 Here, whole cherry (or grape) tomatoes are thrown into a screaming hot pan along with some olive oil. The tomatoes are sautéed until they start to burst from the heat.

Once you can see the skin start to ripple, I add in a few cloves of chopped garlic and salt and cook them a little bit longer, just until the garlic is slightly softened.

To help the tomatoes along in the cooking process, about ¼ cup of water is added in and I use the back of a wooden spoon to gently smash the tomatoes, letting all of the seeds and juice combine with the water and garlic to create a sauce of sorts. 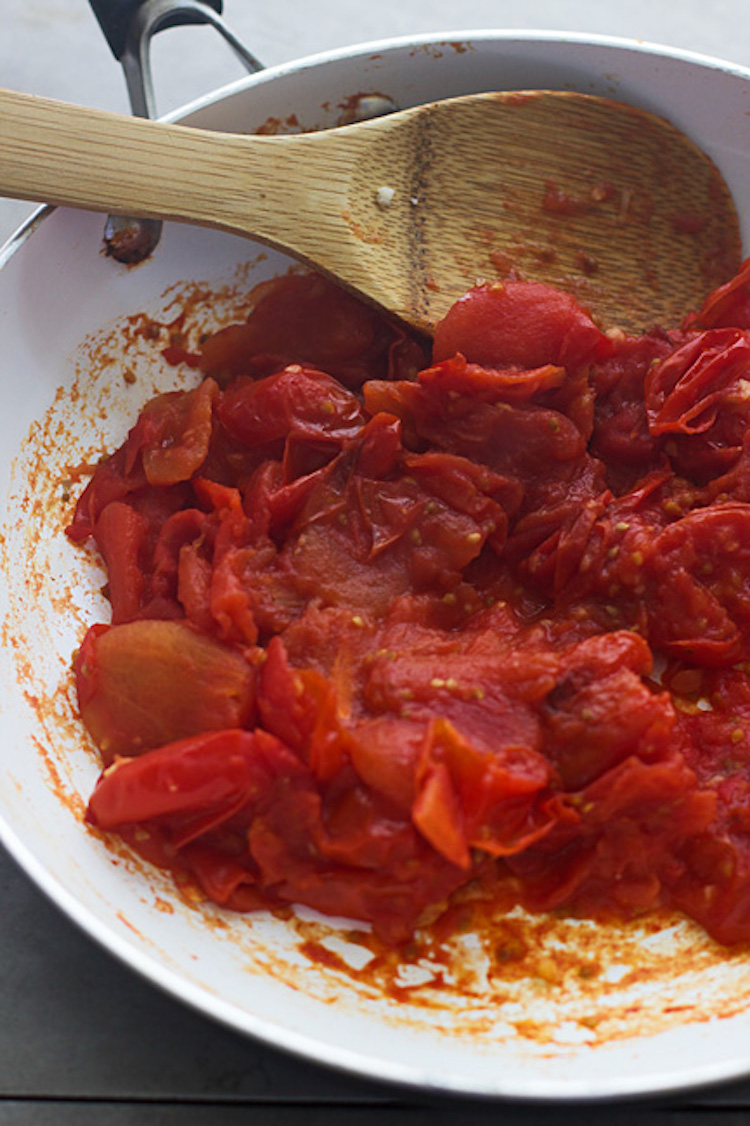 If I was going a step further and using it for a pasta sauce, I’d add in a little bit of sherry or white wine and some starch cooking liquid, but since we want the tomatoes to still be relatively sturdy, I turn the heat off and simply season with a bit of salt and pepper.

For the herbed ricotta component, I just take store-bought whole-milk ricotta and combine it with a little bit of chopped dip, parsley, olive oil, garlic powder and salt.

The mixture is slathered onto crisp pieces of crostini and then topped with a little bit of the burst cherry tomatoes and a sprinkling of fresh dill.

As I mentioned before, I’ve made hundreds of crostini in all the years I’ve been cooking, but honestly, I think these might be my favorite version yet.

I love how the warm cherry tomatoes almost melt into the creamy ricotta and give this hot/cold sensation on the palate when you bite into it.
[adinserter block=”2″] 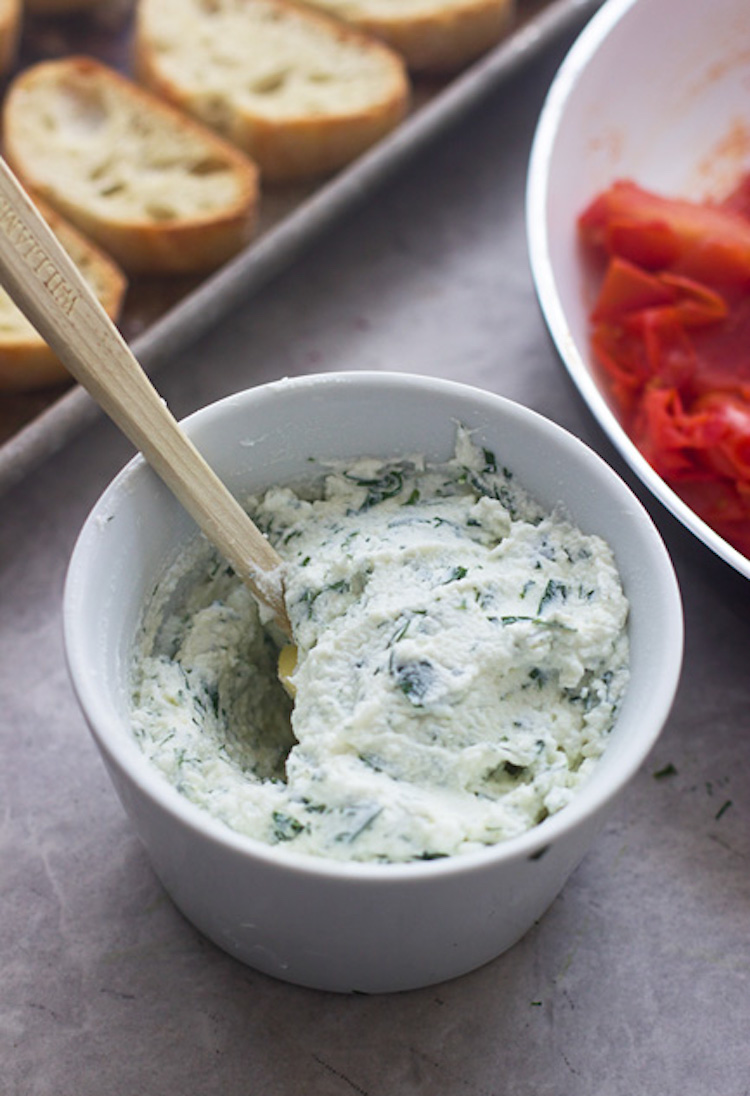 Another thing I love about these is that each competent can be made ahead. The ricotta can be assembled at least two or three days in advance, the tomatoes and crostini, a day ahead.

Just pop the crostini in a 350 degree oven until they crisp up again and then re-heat the tomatoes in a sauce pan over a low heat.

Entertaining made easy. And delicious. 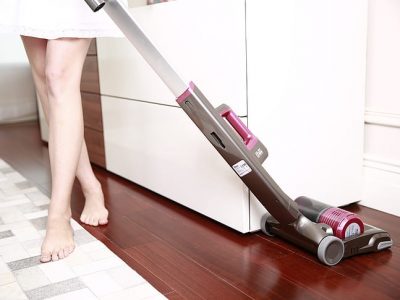 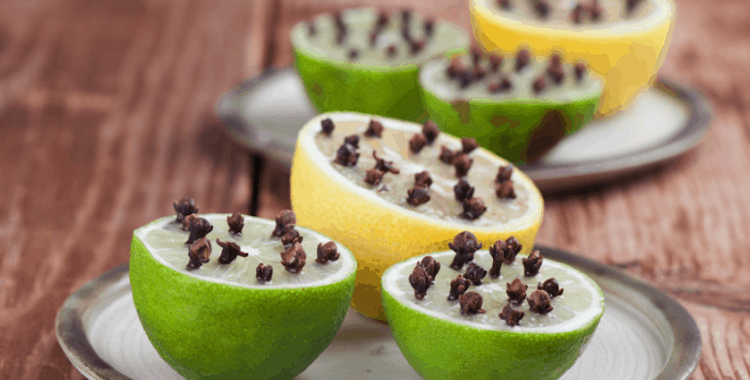 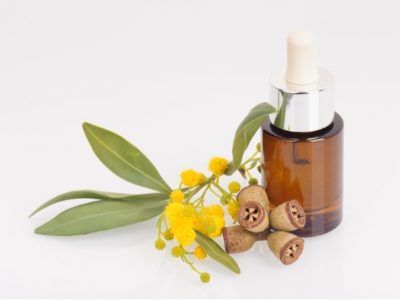 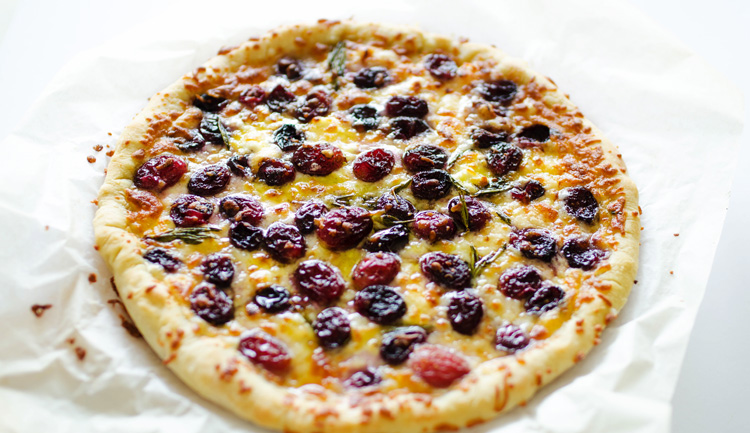 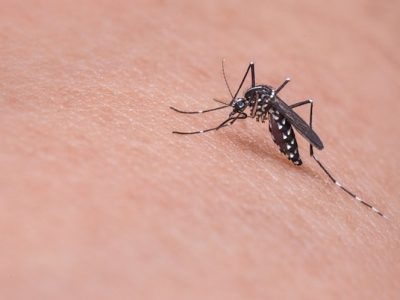